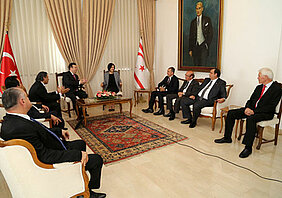 The Organization INGO Diplomaten International enjoys the highest confidence and has internationally earned a high reputation due to its professionalism. It is also active in the United Nations. One of their work’s focuses constitutes the aim of the United Nations: To solve the problem of human rights in Northern Cyprus.

How can it be acceptable that in Europe there is still a country divided by a border, and people in a part of this country (Northern Cyprus) are discriminated? It is Europe’s both blame and responsibility which it has still not complied with.

After our permanent submittals to the United Nations implying the continuation of Kofi Annan’s plan, there is finally a commotion in the negotiations that have been set out since 10 years already. One couldn’t really deny an excessive interest in Europe’s well-being on the UN’s part. However, should the US send a signal to the Europe first that Cyprus can be reunited again? US American diplomat Viktoria Nuland gave a visible signal to the discussions in February 2014 and in May 2014 the vice president Joe Biden announced about their interest in the reunification of Cyprus. At least an immediate bizonal solution should have ensured the equal status of both island states.

This convergence will now be promoted and advanced by INGO Diplomaten International. Already in January 2014 a delegation from this organization met the president of the state Dr. Dervis Ergolu and presented measures that should trigger the process of reunification. At this point America should also be involved. An idea of a federal structure with the equated states was presented during the cordial meeting with the foreign minister of Northern Cyprus Özdil Nami. Thereby the tasks for the organization Diplomaten International were also discussed.

The main goal is the reunification of Cyprus! The organization Diplomaten International, represented by its president Guenther Meinel, assured the president of state Dervis Eroglu of their entire support. The situation of both island states was also discussed with the president of parliament of Northern Cyprus, Ms. Dr. Sibel Siber. INGO Diplomaten International will further on take a stand for human rights and against the previous violations of rights and people discrimination in this part of the island.  In this way the necessary border crossing into the Greek part of the island is illicit. A Lufthansa stewardess explained that she is not allowed to make an announcement in Turkish. Such examples appertain, unfortunately, to the daily agenda.