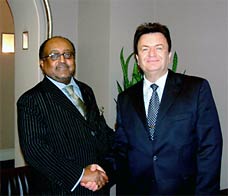 Projects for the coming year were agreed with His Imperial Highness Dr. Asfa-Wossen Prinz Asserate. After his bestseller "Manieren" (Manners), he published his second book in 2007.In addition to promoting support for Africa, both parties were involved in the hosting of a conference on the topic of "Islam - The Challenge of Our Century" in Bonn in June 2007. Prince Asserate has been an advisor to the DMW for six years.

He is the great nephew of the last Ethiopian Emperor Haile Selassie and son of the former Governor (and therefore Viceroy) of Eritrea Li'ul ras Asserate Kasa (also Asserate-Maryam Kasa).