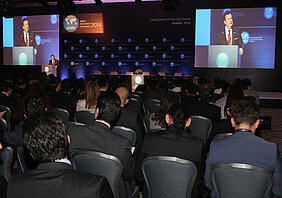 130 countries participated in the World Congress hold by WAIPA (World Association of Investment Promotion Agencies) on 14.05.14. The congress demonstrated a clear shift in the economic balance of power.

The most urgent task for the countries is to cope with the unemployment among youth that was aggravated by the crisis in a number of countries. In order to generate jobs, the know-how, and the growth, the countries should attract foreign direct investments. Other topics included development of industry and external trade as well as necessary changes due to the financial crisis and opportunities that arise from the shift in the global economic balance of power.

The president of the INGO Diplomaten International Organization, Dr. Guenther Meinel, was invited to be a speaker at this year’s world congress. His appealing to peace activities was accepted enthusiastically. Meinel explained that Europe should meet other countries on an equal footing, since Europe can also benefit a lot from other countries. This rebalancing of power sparked great interest in the represented countries. New impulses created further economic motivation. At this point increasing dynamic in Turkey was pointed out and a program for developing a generation of engineers was represented.

In his speech Dr. Guenter Meinel also urged to relocate the headquarters of the Investment-World Consolidation WAIPA from Switzerland to Istanbul. This idea found 80% consent of the delegates. The WAIPA president, Mr. M. İlker Aycı, thanked Dr. Meinel for that and confirmed that he would be pleased to work together with INGO Diplomaten International further on. Mr. M. İlker Aycı was reelected as a president of WAIPA and received numerous congratulations from all countries.