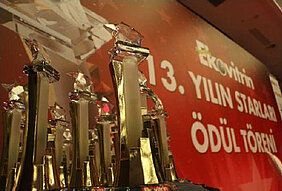 Turkey annually honors the „stars“ with the big prize of Turkey. Presidents of the state and high-ranking meritorious individuals have already received this meaningful prize. The nomination is carried out by a jury. By means of a reader survey, hold in the whole country, prize winner is determined. A number of honored guests have pursued the award presentation and contributed to the dignified atmosphere of the occasion.  Dr. Günther Meinel, the president of the organization „Diplomaten International“ was also nominated and awarded with the prize in 2014 for his by now 15 yearlong endeavor to bring Turkey closer to the European Union. In his speech of thanks Dr. Meinel emphasized that this prize-giving is at the same time an obligation for the future commitment. He referred to a rapid pace of progress and the surgency of the Turkish, who show themselves even more motivated due to their successes. Dr. Meinel especially supported the relocation of the headquarters of the investment management from Zürich, Switzerland to Istanbul. The idea was maintained at a world congress by 80 % of the respective countries.