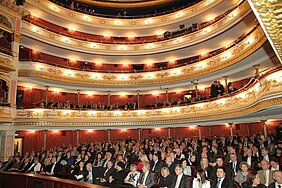 The organization Diplomaten International pursues the United Nations' campaign for worldwide education. This UN campaign aims to preserve as well as obtain peace by contributing to an improvement of living conditions by enabling people worldwide to get a better education.  Knowledge is the currency and the resource on which the countries of the world are standing.

The republic of Poland sets a good example: the universities of Kraków and Wroclaw are among the world’s best. It was therefore with great joy that the organization Diplomaten International took part in the celebrations of Politechnika Wroclaw jubilee of 70 years. This outstanding university made a name for itself by producing some of the best educated engineers, who are highly sought after on the international technical market.

The grand ceremonial act was kicked off in the opera of Wroclaw. The dean Prof. Tadeusz Wieckowski hosted the opening ceremony and gave an introduction to the institution’s founding fathers. The president of Diplomaten International joyfully took part in these celebrations.

The act was honored by many reputable personalities. Prof. Edward Chlebus (Dean Politechnika Wroclaw) for instance has rendered outstanding services to his academic division and was also able to contribute many research findings to the manufacturing industry. His graduates are extremely sought after, due to their participation in different kinds of practical experiments in the course of their education. Prof. Tadeusz Wieckowski, president of the technical universities in Poland and president of the rectors’ conference, is a very influential luminary. He is considered a special initiator for Poland’s campaign for education, which has been very successful so far. He was granted all levels of support and cooperation.

One highlight of this festive act was the achievement award for Prof. Dr. Reimund Neugebauer, president of the Fraunhofer Gesellschaft. The touching laudation of Prof. Wieckowski was followed by the presentation of the award to Prof. Neugebauer. He was awarded an honorary doctor for his merits in his research for the university.  In his acceptance speech, Prof. Neugebauer stressed the good and solid relations between the Fraunhofer and the research institutions in Silesia and the Politechnika in Wroclaw. He deemed the stages of development as exemplary. The present guests of honor were deeply impressed, especially the protocol for the representative excellences evoked great emotional response.

Dr. Günther Meinel, president of Diplomaten International, congratulated Prof. Neugebauer cordially to this worthy award. The both presidents agreed on a continuingly strong collaboration to the benefit of science. International projects were discussed among the professors and Diplomaten International. These should be conducted on an international basis under collaboration with four different countries. The professors Chlebus and Neugebeuer have established a trustworthy and solid partnership between the technical university and the Fraunhofer Gesellschaft.

The presidents of the technical universities discussed the possibilities of improvement in the education of students by using special systems of practical experiments. The application of such practical experiments will likely improve the education of future engineers and make them more attractive to the international employment market. Studies have shown a decrease of the duration of study by up to three years while maintaining efficiency and quality. This system, implemented by the company Lucas-Nülle from Germany, is leading worldwide. Students who were educated with this system have the best chances and employment opportunities on the job market. They are the ones who dominate world class. Owner and founder of the company, Dipl.-Ing. Rolf Lucas-Nülle is also a member of the United Nations’ Scientific Advisory Board for Initiatives in Education. 45 years ago, he asked himself the question how “well trained” engineers and skilled engineering workers could participate in the creation of economic development. This is how he started to create solutions that have been implemented worldwide.

At the ending of the ceremony, young academics were appointed for the young generation of scientists, who graduated successfully in the technical field of study. The next rectors’ conference was announced to take place in Gdynia and President Prof. Tadeusz Wieckowski already gave out invitations.

The good relations to Poland cannot be underestimated in their meaning to European peace. On the other hand, Poland is one of the beneficiaries of financial support granted by the European Union and the EU enlargement.