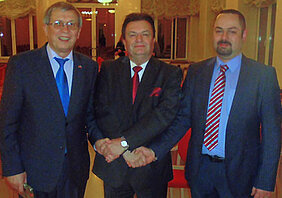 Unfortunately, mass media fail to inform us about the actual situation due to the clash of interests. Besides, our smart leading politicians, as e.g. the foreign minister Frank Walter Steinmeier, do show some initiative, however was not able to get their own way, unfortunately.

At the moment, the alarm bells are ringing so loud that nobody can miss them.

Anyway, the conflict with Russia has become so broad that the facts should be on the table once again. We should urgently remind that neither war monger nor Nazis get the upper hand in Europe. Yes, the Ukraine conflict can trigger the 3rd world war still in 2015.

Of course, our Federal Chancellor, to whom we regularly impart our stand points, knows that. Mrs. Merkel is repeatedly informed about our mission to contribute to understanding among nations and about our invocations to peace activities. At the end of January she thanked us for our heartily greetings and also replied to those, whole-heartedly. We need peace not only for our economy but also for our families and our fellow human beings!

We link up her heartily greetings with the hope that our Chancellor will follow up on her pursue for peace. If we should witness the rearrangement in the balance of power or even in the world order, all this can also happen peacefully. She presented thoughtfully at the peace conference in Munich that weapon deliveries to Ukraine don’t impress President Putin much. “One should just say it”, she mentioned. If some Mr. McCain, who is only good for a carnival speech, does not understand this, in the future more consideration should be bestowed upon other individuals who can at least be taken seriously.

Putin knows Russia’s strength! One of the most important weapons is the “Russian pride”! That one is really invincible! For this reason, every peace-loving person should humbly and gracefully mark the 70th anniversary of liberation from Hitler’s fascism by the forces of the Red Army. Even though Nazis are calling for boycott!
Allegedly, Putin is being warmongering. However, these rumors are propagandistic. Analysts have a different point of view upon that. President Putin once mentioned, he would have been in Kiev in 14 days, if he wanted to. Nato general a.D. Harald Kuja corrected this statement with “No, President Putin would have been in Kiev in 6 days”. Also the US foreign Minister John Kerry’s statement, that the Ukraine crisis cannot be solved in a military way, underpins Russia’s strength. Russia’s military power is superior to that of the USA and Europe. Since Russia has never trusted the West, it invested a lot of energy into military research and space technology. It’s not a coincidence that when once an accident occurred on the space station ISS, American crew sought shelter in the Russian department.  It was just safer. How often did Putin ask for trust towards Germany? During the 1st St. Petersburg’s Dialog 2000 already, the steps and possibilities of cooperative partnership were the matter of discussion. Putin’s speech in front of German Bundestag was the culmination of the event. Putin got both a standing ovation and a pledge of trust. Hymns of thanksgiving were performed as a forgiving gesture towards Germans for murdering 27 million Russians.

Yes, the annexation of Crimea Peninsula was a breach of the international law similar to Kosovo, Iraq and some other countries. But how else should the president react to the fact that the USA – sometimes it behaves really naïve – places on its official internet website what it is planning to do with Crimea once it’s in under the USA’s power. Surely, the estate offers became very tempting. Besides, if even the US’s chief diplomat Viktoria Nuland discloses quite unreservedly the whole strategy for Crimea’s takeover, then one should be really somnambulant not to secure the “Black Sea Fleet”! For that reason alone, more and more analysts tend to accept this step, even though it doesn’t seem quite right according to the postulates of the international law.

While assessing the Ukrainian crisis, we should also accept the whole recent history. We follow the crisis in Ukraine for years. It couldn’t be tolerated any longer the way the oligarchs robbed people and brought suitcases full of money to both the government and the courts of law. Then the 2014’s “Orange Revolution” signaled hope. We interviewed some students in Kiev: What do you expect from the revolution and why are you waving either an orange or a blue flag? The answer was: “We receive 12 Euros for waving a blue flag and we got 14 Euros if we wave an orange one”. Only a few people hoped that corruption would be eradicated. Then it became even worse! Oligarchs went on to enrich themselves and democracy was stamped to death. Our chairman, Guenther Meinel, conducted a few debates with the oligarchs and pointed out the importance of democracy movements. However, corruption became the leading currency in the country. When Meinel addressed Spiegel’ editorial office asking them to depict these misunderstandings, he got very little support from them, on some unknown reason. Even the conversation with the Spiegel’s editor in chief, Christian Neef, had no effect upon the issue. The responsible editor explained later that at first the oligarchs should be asked whether they would give their consent to the publication. Well, it’s not worth the inquiry!

Appealing to the European Union also went unheard. People in eastern Ukraine surely feel ostracized but nobody pays any attention to their problems. Even when J. Timoshenko declared that all Russians in eastern Ukraine should be shot dead, her words fell in a category “freedom of expression”. Tensions in eastern Ukraine are getting more and more explosive and the hatred becomes even stronger. DMW’s chairman Guenther Meinel invited Kateryna Juschtschenko, the president’s wife to come to Germany in pursuit of bringing forth the democratic process and fighting corruption. However, Mrs. President declared that against corruption even the president of the state is helpless! Two years ago already, we implored the European foreign affairs office: “Please, avoid the civil war in eastern Ukraine! Compel Kiev’s government to tie in eastern Ukraine. Don’t prohibit Russian culture, language and way of life!”. None of eastern Ukrainians dared to admit he was Russian. Alike humiliations, but against Jews, we witnessed ourselves in the year 1933. Hatred had become insurmountable. We learned from our German history that modified hatred between different nations – here between eastern Ukrainians and other Ukrainians – can only be overcome over generations. The chairman spoke with people. He saw how water reservoirs had become contaminated by corpses and people had to dig new wells to get drinkable water. Such hatred hurts. Someone should have already started to act here by means of trusted negotiations. This conflict had been known in Europe for decades. An agreeable result demands patience. European foreign policy needs getting used to. As well as the demand: “Freedom for corrupted Julia Timoshenko in exchange for an opportunity to join the EU”. Already at this point the negotiation feels like a trade on a horse market.

The manner how Ukrainian governor Arsenij Jazenjuk performs his hate campaigns enrages not only Ukrainian folk but also all peace loving people. Especially because Jazenjuk is on the payroll by the US government and acts as if well-trained by them. Even if his declaration in Berlin: “It was Russia that assaulted Germany during the World War II”, will also be referred to as freedom of expression, he must be demonstrated the boundaries.

But how can you keep people in Ukraine silent? Only by making promises that cannot be kept? Oligarch and multi-billionaire Petro Poroshenko, who had taken possession of several sugar refineries in both Ukraine and Russia during the process of privatization, promised Ukrainians freedom to travel in the EU countries from this year on. We are sure to be witnessing yet this process of disappointment.

In conclusion, one can only hope for two things:
We have to prevent that the corrupted Ukrainian government asks for deliveries of arms from the USA, which indeed can happen. The present government is unpredictable. Only by doing so, a world war can be prevented. Deliveries of arms usually form a set with well skilled soldiers, and the latter can come from the USA only! Eastern Ukraine will become a sovereign autonomous area – it should come this way to stop further homicide!

Of course, the chairman Guenter Meinel travelled to eastern Ukraine personally to convince himself of the situation on-site. It looks like the young Ukrainian soldiers are not persuaded by their deployment. Many of them have relatives in the eastern part of Ukraine, so they quit and run over to the other side. The chairman was even sitting in the same restaurant with the soldiers from the private troops battalions and was in talks with them. The soldiers are paid above average and so are highly motivated to kill. Peace would lose them their existence that is why the war, from their perspective, should go on. The financiers of these battalions should not be shut out during peace negotiations. Otheriwse a partisan warfare can outbreak.

We all hope that we will be able to contribute to peace personally!