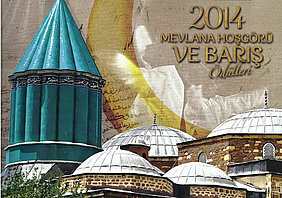 By the nomination of President Dr. Günther Meinel and the organization Diplomaten International for the Mevlana Peace Award were honoured important projects aimed at promoting peace. Thereby the efforts targeted the reunification of Cypress, development of the relations with Turkey as well as Turkey’s relationship with Russia and Poland and the continuous dialogs around Islam are meant.
The mentioned issues are only an excerpt from the list of the organization’s many projects all of which serve the peacekeeping. The organization Diplomaten International received the Mevlana Peace Award on 24.02.2015. The award is dedicated to philosopher Mevlana who was born in Balch in medieval Khorasan (modern Afghanistan) on 30th September 1207 and died in Konya on 17th December 1273. He coined a sentence that has become defining for the world peace: “Come, no matter who you are!”. Even today Mevlana is honoured as a master of peace.
In his speech of thanks the chairman Dr. Günther Meinel mentioned a continuous dialog with the Islam and of the dovishness of Muslims. Especially, he pointed out at the progress in Turkey. Alienation from Islamicists and conversion of their worldview in favour of humanity is the foremost purpose. Another one is to be able to accept all people and to coexist peacefully. Meinel explained: “Earth, the precious gift to us all, looks so gracious from the outer space. We, humans, should always remember: That gift should neither be abused nor destroyed. Forgiveness should become to everybody’s moral fiber; and people should not lose the vigor to carry constant dialogs! Perpetual peace and its retention tag the cleverness of civilized individuals”.
Subsequently, Mr. Burhan Kuzu, the president of the constitutional commission, took over and thanked the president of Diplomaten International extensively for his tireless work for optimization and extension of relationship with Turkey. “On behalf of entire Turkey, we thank Dr. Meinel for his great commitment especially in reference to the relationship with Turkey but also for his great contribution to the Cypress issue that operated very positively for the world peace. Dr. Meinel has also acted upon de-escalation in Ukraine. For us Dr. Guenther Meinel is a very significant reliable person for Turkey. We can always respectfully count on him.“
Dr. Guenther Meinel bowed his thanks while receiving the award and assured that he would selflessly put himself out for the world peace and the relations with Turkey further on. (Source Turkish Press)
All in all, 1200 guests attended this festive event. Many publicly distinguished personalities were present. They pledged to contribute to peace with combined forces even more and also decided to organize a conference in support of this idea. Mr. Ferhat Bozcelik from the executive board of Diplomaten International received the award for his excellent networking in Turkey. Finally, gigantic fireworks finished the awarding ceremony that included the categories “peace”, “culture” and “scientific accomplishments”.