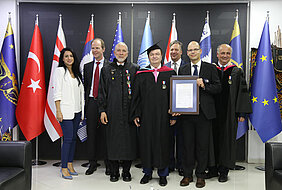 It was a thank you and recognition of the not always easy work and a special honor that the renowned Girne American University has appointed our President as a professor. A high level of education is and has always been our goal. The better the education, the fewer conflicts we have to solve.

The laudation says, among other things, in excerpts:

„The university recognizes his services in the diplomatic service, as well as his talent for reconciliation between countries in the event of tensions and to build constructive relationships between countries in the event of conflicts. After graduating from two universities, Professor Meinel recognized his passion for international relations. In this way he has earned respect and a high degree of respect for his diplomatic tasks in many countries.

Due to his straightforwardness and reliability, he has also earned the trust of Turkey. He was invited by the European Union when it came to Turkish-European relations. Even when there was tension between Turkey and Russia, he was called in as a trusted partner. Even when there was a conflict between 10 ambassadors from Europe and Turkey, his advice was sought.

Many investors also trust him because of his commitment to fair trade and social responsibility in economic relationships.

For the fourth time in the past 23 years, international personalities from 12 countries have elected him President of the international NGO "Diplomats International.

Through his special skills and extraordinary talent for leading and motivating people, he has also taught many young people that diplomacy can be stronger than any weapon in the world.

Günther Meinel is so highly esteemed that the university's committee has conferred an honorary professorship on the Chair of International Relations for the first time in 37 years.“

Prof. Günther Meinel was also solemnly welcomed by the students at the Chair of International Relations. He himself showed himself to be grateful and humble to have been called by this renowned university. Other universities also wanted to win him over to teaching. He values the Girne American University, which is connected to the state university in Arizona USA, because of its international character. Students from 120 countries are trained here.